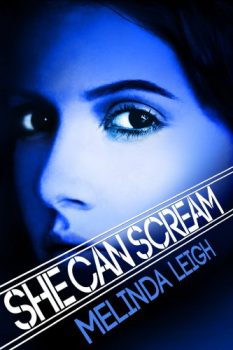 She Can Scream
by Melinda Leigh

Winner of the 2014 Golden Leaf Award

In one moment, high school teacher and single mother Brooke Davenport interrupts a vicious assault, saves a young woman's life, and attracts the attention of a serial killer.

Sixteen years ago, Brooke lost her roommate to a brutal murder. Now she teaches women's self-defense, still trying to heal from the guilt and grief that plague her. Convinced the predator knows his victims and is stalking his prey online, she is determined to find him before he strikes again. Her brother's friend, Luke has the computer expertise to help. But Brooke's unexpected desire for Luke complicates her investigation, and her fixation with the case provokes a deadly reaction from the killer.

Injured in terrorist bombing overseas, computer expert Luke Holloway is still haunted by flashbacks of his young assistant's death in the explosion. But Luke can't refuse the request of a deployed friend to look after his sister, Brooke. Taking on responsibility for Brooke's safety threatens Luke's tenuous recovery, especially after he develops feelings for her that transcend a promise to a friend. When Brooke saves a young girl from a brutal assault and becomes a killer's obsession, Luke vows to protect her at all costs.