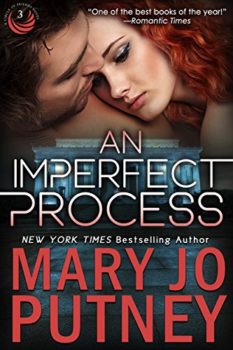 From bestselling author Mary Jo Putney comes an emotionally charged story of a man and a woman brought together by a passion for justice, a hunger for change, and an imperfect process.

Corporate law has given Val Covington high profile success, Armani suits—and no time for a life. Recklessly she walks away from her uptown job and starts her own practice, determined to do work that matters.

Renting a remodeled church for her new office gives her an unexpected bonus in the form of her landlord. Rob Smith is the kind of guy Val is always attracted to: mysterious, handsome, and haunted. Which means, based on her track record, that he is also a loser, but this time she’s smart enough to avoid involvement with the wrong man.

Then Val’s assistant makes a desperate plea for help in saving her one-time lover from being executed for a crime he didn’t commit. Val agrees to try, though success seems impossible. Rob, who has private reasons for wanting to work with Val, offers his formidable investigative skills in the quest for justice.

Working against the clock, Rob and Val discover irresistible mutual passion as well long hidden secrets. But will their new evidence be enough to save a life? And can two very different people change enough to build a life together?

Perhaps they can, when fate takes a hand….

Originally published August 2003 as Twist of Fate in mass market paperback by Jove and January 2013 as The Imperfect Process in eBook format by ePublishing Works!.