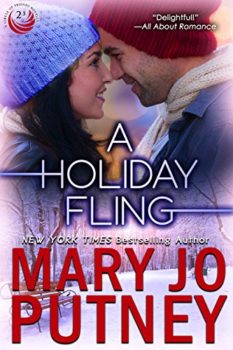 * A Holiday Fling is also available in the author’s Christmas novella collection, Christmas Revels.
* This novella was also previously released under another title: A Christmas Fling.

British actress Jenny Lyme is having a pretty decent career. Though she may not have become an international movie star, she’s well loved in England for a role on British TV and continues to work regularly.

Now her hometown community center is in danger of being sold. The only hope for its salvation is if Jenny can film the Christmas Revels production she’s directing and sell it for television broadcasting. For that she needs a really good cameraman—and she just happens to know one….

Greg Marino has worked hard for his success as a Hollywood cinematographer, and he has an Oscar sitting by his coffee maker to prove it. But he still has fond memories of the fling he had with Jenny Lyme ten years earlier when they worked together on a disastrous movie. When she calls and asks if he’d film her community Christmas show, he decides it would be a fun break in his demanding life. And it would be really, really nice to see Jenny again.

The show is a delight, and Jenny and Greg find the old attraction is still there. But is it possible to build a life together when both have demanding careers thousands of miles apart?

Jenny and Greg are characters from The Spiral Path, the second novel in the Circle of Friends Trilogy.

Originally published November 2002 within Christmas Revels in trade paperback by Berkley & November 2005 in mass market paperback by Jove and standalone January 2013 in eBook by ePublishing Works!.