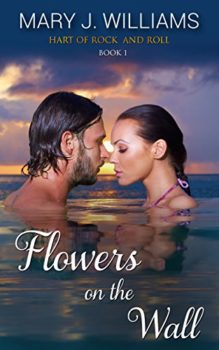 Flowers On The Wall

Hart Of Rock And Roll Book 1

Flowers On The Wall
by Mary J. Williams

Ryder Hart came up the hard way. From his childhood, to scratching his way to the top of the charts. Every moment was a struggle. Now that he’s made it, nothing is taking him down. Not even a secret so dark it invades his dreams and haunts his waking hours.

Quinn Abernathy’s hunger for success is no less than Ryder’s. If she wants to succeed in the highly competitive world of photography, she can’t let anything, or anyone, get in her way. Until Ryder. He makes her long for more than she ever thought possible.

Music is Ryder’s life. There isn’t room for a woman like Quinn Abernathy. A woman who asks for nothing but wants it all.