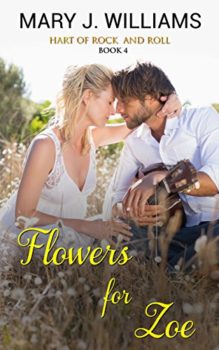 Hart of Rock and Roll Book 4

Zoe Hart knows who she is. Sister, friend. And badass lead guitar player for The Ryder Hart Band. A childhood filled with all-to-real monsters and the uncertainty of foster homes left her no choice but to grow up fast. To survive she built a wall that over time had gotten taller—thicker. She didn’t let in anybody but her closest friends. And even they didn’t know all her secrets. She doesn’t need a man in her life to make it better. She doesn’t need a man. Period. Especially a cocky, charming rock God who is used to women falling at his feet.

Smith Carson had known Zoe Hart since she was teenager. Pretty. Amusingly snarky. She was more of a girl than a woman. While he admired her as a musician, he always thought of her as Ryder Hart’s little sister. In other words, hands off. When that changed, he wasn’t certain. All he knew was that one day—in what seemed like a blink of the eye—she was all grown up. Breathtakingly gorgeous. Along with an outer maturity, her snarky tongue had turned from amusing to acid sharp. If Smith wanted Zoe—and he did—it was going to take more than some charm and a smile to win her.

Resisting Smith had been easy when Zoe thought he was a shallow, narcissistic pretty boy. The attraction was there, but that was all. Smith didn’t try to hide his intentions. He wanted Zoe. To her surprise—as she got to know him—she found herself wanting him back. Before she knew what was happening, he snuck underneath her well-constructed walls. Smith was on a path to her heart—something Zoe hadn’t thought possible.

It was tempting. Smith was tempting. But secrets—no matter how well buried—have a way of digging their way to the surface. Demons—both emotional and real—have haunted Zoe most her life. It’s time to face them once and for all.

Can Zoe find a way to open her heart to what Smith is offering? Or will the past destroy what she wants the most? Love.