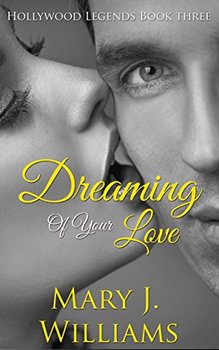 Dreaming of Your Love

Dreaming of Your Love
by Mary J. Williams

Hollywood is a cutthroat town.
Nobody knows that better than the Landis brothers.
It’s time for them to step out of their parents’
shadow.

THE MOVIE STAR AND THE BODYGUARD

Colton Landis is on fire. His career has taken off and he
has finally moved out of the shadow of his superstar mother
and producer father. He has his pick of movie projects and
women. The perks are amazing. He loves his life. He has
nothing to complain about—except his brother’s
insistence that he needs a bodyguard.

So what if he was attacked at his last movie premiere? The
man was crazy. One little nick with a knife and his family,
and the insurance company blows it out proportion. He
doesn’t want protection. He doesn’t need
protection. Unless…

Enter Sable Ford. Ex-Army Ranger. And the only woman who
didn’t fall at his feet. If Sable is his bodyguard,
Colt is on board one hundred per cent.

For Sable, Colt is just another job. Or so she tells
herself. A few weeks living the glamorous life as a movie
star’s pretend girlfriend? Why not? But what starts
out as some flirting and a bit of sexual tension, soon
escalates to more. Much more. Sable isn’t ready to
give her heart to a man who thinks of women as fun and
games. And Colt isn’t ready to give his heart. Period.

When attraction turns to something more, can they find a way
to reconcile their very different lives? Can Sable come to
terms with her past—the secret that made her leave the
Army? Can Colt convince her that he’s ready for love?
Ready for her?

The movie star and the bodyguard. It seems like an unlikely
combination. But when it’s right, nothing else
matters. Not his reputation, or her past.

Colton is the youngest Landis brother, but his love story is
just as epic.