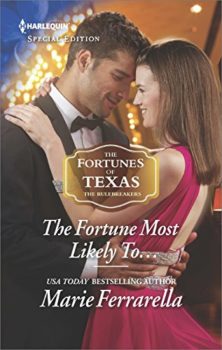 The Fortune Most Likely To...

The Fortunes of Texas: The Rulebreakers

The Fortune Most Likely To...
by Marie Ferrarella

The Fortunes of Texas: The Rulebreakers continues!

Dr. Everett Fortunado is sitting on the biggest secret to hit Texas—but nothing’s more shocking than finding Lila Clark working for the Fortunes. Years ago a teen pregnancy forced her to give up their baby…and Everett. Lila’s not one for second chances, but that won’t stop Everett from trying. Because this time around, he knows the meaning of family. And he wants his—with Lila!