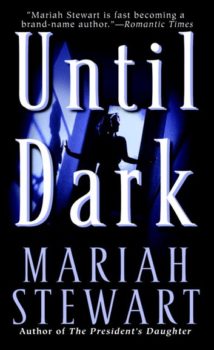 Until Dark
by Mariah Stewart

A skilled compositor for the FBI, Kendra Smith has a way with witnesses, helping them to remember crucial details about their attackers they might otherwise have forgotten. She believes her work helps to provide closure for the victims and their families---closure that has eluded her for the eleven years since her brother was kidnapped, his body never found.

Determined to put her painful past behind her, Kendra throws herself into every case one hundred percent. Now she is called in to sketch the face of a man the press is calling the Soccer Mom Killer. It's a difficult investigation made even harder by the presence of Special Agent Adam Stark, a man with whom she once had a brief, passionate affair. As the number of victims continues to rise, and with a killer always one step ahead, Kendra will learn a lethal lesson: You can run from the past, but you can't hide. . . .