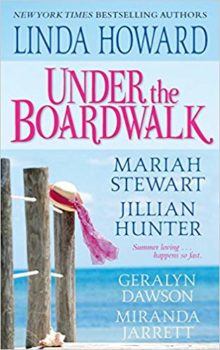 In Blue Moon, New York Times bestselling author Linda Howard lures a sheriff into a scorching murder mystery---and into the arms of a lover from the heart of the South: the wet and wild bayou.

In Castaway, Geralyn Dawson traces a precious heirloom---and heats up a past marriage---on a a secluded Texas island.

In Ruined, Jillian Hunter sparks romance off the English coast, when a London beauty in distress is rescued by the very man who could ruin her reputation.

In Buried Treasure, Miranda Jarrett ships a rogue pirate back to shore to rekindle a summertime romance. But did his sweetheart wait for him?

In Swept Away, Mariah Stewart crosses a successful oceanside chef with the man of her dreams---a P.I. with secrets of his own---at a vacation spot packed with memories for them both.