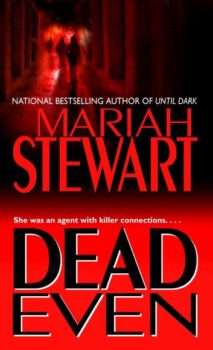 Dead Even
by Mariah Stewart

FBI Special Agent Miranda Cahill has always played by the rules: always maintain a respectful professionalism, and never mix business with pleasure. Except when it comes to fellow agent Will Fletcher. Their on-again, off-again relationship has left painful scars even he has never seen. Now, a series of murders has the two agents racing to outwit a killer before he can strike again. Miranda and Will know that lives depend on identifying intended victims and tracking them down before the killer does. But as they begin to unravel this homicidal agenda, it becomes clear that Miranda may be the last and final target in a twisted game. With the clock ticking, time is running out on a killer who is determined to cross Miranda's name off his hit list . . . permanently.