He’s a hot shot attorney who’s never lost a case. Or failed to get the girl.

It’s her job to make sure he doesn’t win. Or sneak his way into her heart again…

Jenna Pantini has just become Whispering Bay’s first female city manager and she’s determined to succeed where less qualified men before her have failed. Her mission? Balance the city budget and keep the quaint little Florida beach town out of the hands of greedy developers.

When founding father Earl Handy bequeaths the town miles of pristine beach front property to be used solely for public access it almost seems too good to be true. Earl’s daughter isn’t about to be robbed of her inheritance, especially when everyone knew old Earl was crazy as a loon, so she hires cocky attorney Ben Harrison to break her daddy’s will.

Ben is legendary in legal circles for never losing a case. He also has another kind of reputation—one with the ladies, something that Jenna knows all about first hand. Back in college Ben was Jenna’s first love, a relationship that ended with Jenna heartbroken.

Ben would love nothing more than to pick right back up where he and Jenna left off, but the feisty redhead isn’t interested in anything but seeing him leave town. Too bad she isn’t going to get her way because Ben has more at stake in Whispering Bay than just a legal case. He made a long ago promise to family that he needs to fulfill. Plus, there’s all those old feelings that he and Jenna can’t quite seem to shake…

Other Books by Maria Geraci 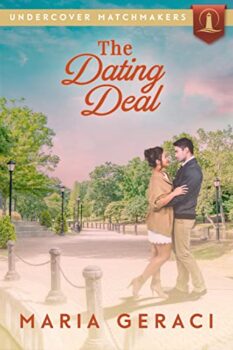 Come and Get Your Love
Barefoot Bay

Hold On To Forever
Barefoot Bay

That Thing You Do
Whispering Bay Romance Book 1