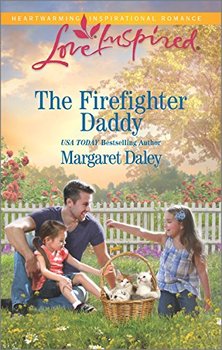 The Firefighter Daddy
by Margaret Daley

From Bachelor to Father

Firefighter Liam McGregory is used to staring down five-alarm fires---but becoming a father to his two little nieces has him sending out a call for help. When the girls return a lost pup to its beautiful owner, Liam thinks widow Sarah Blackburn is just the person he needs---or who the children need. He's promised to never marry again. Sarah takes his deal: she'll watch his kids and he'll watch her menagerie of pets---but the new father is off-limits. But two determined little matchmakers can be hard to resist when they need a mom to make one big happy family...