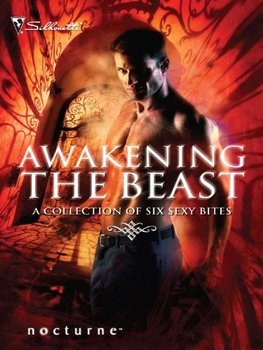 A Collection of Six Sexy Bites

Enter the darkly seductive world that exists within
Nocturne Bites’ with tales woven by some of the most
spellbinding authors: Lisa Renee Jones, Olivia Gates, Linda
O. Johnston, Barbara J. Hancock, Caridad Piñeiro and
Lydia Parks. Let them take you on a thrilling ride where
you’ll catch a glimpse of sensuous, sexy men who share
their wildest desires in ways you thought only existed in
dreams….

Werewolves, vampires and shape shifters…oh my!
Don’t be afraid to wake them. They’ve been
waiting for you….

Honor Calls “The Calling series”
by Caridad Pineiro (originaly published February
2009 in Nocturne Bites eBook format)
As FBI Assistant Director, Jesus Hernandez expects a fair
share of crime in New York City. Yet nothing could have
prepared him for what he witnesses outside a Goth bar called
the Blood Bank: hunter Michaela Ramirez slaying an elder
vampire. Jesus is skeptical at first, but Michaela is
determined to make him believe in the supernatural beings
that roam the city. And as Michaela draws him deeper into an
underground world of darkness and danger, he finds her sexy
bravado is more than can resist….

But there is one thing Michaela is afraid to tell Jesus:
that she is part vampire herself. Because even though
she’s fallen for the enticing agent, everyone
she’s gotten close to in the past has run
away…or died.

Read an excerpt of Honor Calls

Return of the Beast “The Knights of
White” by Lisa Renee Jones (origianlly
published June 2008 in Nocture Bites eBook format)
Saved by an immortal after an attack by a Beast, Chris Avern
is doomed to carry that beast within himself. It taints his
soul with a darkness that can only be purged by finding his
chosen mate. Now, as a Knight of White, a demon fighter
caught up in an ancient war between good and evil, Chris
must battle the soulless Darkland Beasts intent on reaking
destruction upon humanity.

Sent to save the hometown he
left twenty-five years ago from an onslaught of Beasts,
Chris comes to the rescue of ranch owner Alexis Wright. He
is drawn to Alexis with a demanding passion that nearly
overwhelms him and he recognizes immediately that Alexis
must be his chosen mate. But, while he knows Alexis can be
his salvation, he is torn by conflict. For to draw her into
his world, he must put her life...and her soul...in
unimaginable danger.

Mortal Enemy, Immortal Lover by Olivia
Gates (originally published in Nocture Bites - eBook
format)
From the moment they met, Javed and Desirï¿½e have shared an
explosive passion. Yet Javed fears that being with Desi will
put her in danger from the monsters that inhabit his
world...monsters like himself. An immortal half-vampire,
half-demon with both species’ powers and none of their
weaknesses, even Javed may not be strong enough to save Desi
from his enemies. He is determined to end their affair to
protect Desi…and to tell her the truth about himself.

But Javed isn’t the only one with a deadly secret. For
Desi is an Eradicator, a breed of human with special powers
trained from childhood to eliminate all demons. Once their
true identities are revealed, will these destined enemies
destroy one another—or will their love be enough to
overcome an otherworldly feud centuries in the making?

Claws of the Lynx by Linda O. Johnston
(originally published January 2009 in Nocture Bites -
eBook format)
Nella and Alec had once shared a steamy relationship with
the promise of a long-term commitment—unil Alec saw
her transform into a lynx. Hurt that Alec couldn’t
accept that she is a shapeshifter, Nella moved on...and
joined the Alpha Force, a military organization of people
with paranormal abilities.

Years later, Alpha
Force’s secrecy is being threatened by an
out-of-control journalist. Charged with retrieving the
information that could expose the Alpha Force, Nella is
forced to team up with the last person she expects...Alec!
Once reunited, Nella and Alec soon discover that their
attraction is as strong as ever…but can Alec ever
learn to accept Nella for who she is?

Wilderness by Barbara J. Hancock
(originally published in Nocture Bites eBook format)
Can an uncertain Psychic help a dangerous ’Wolf
reclaim his pack while she discovers her true strength?

Tess doesn’t feel one bit heroic when she kneels to
cut the chains binding a man who might possibly kill her in
reward for her bravery. But, there’s no turning back
now. She’s joined a group sworn to fight for the
rights of Supernaturals. She’s determined to work
against a government responsible for her sister’s
death. She just didn’t expect her first mission to
endanger her life and her heart.

Shadow Lover by Lydia Parks(originally
published in April 2009 as Nocture Bites eBook
format)
In college, psychologist Serena Brockman
dreamed of a secret lover who watched over her and would one
day bring her into his shadow world.
Since then, she has spent her life convincing others that
such mythical creatures aren’t real. Until the night
her shadow lover reappears in his true form—a vampire....

Griffin has experienced centuries of pain and loneliness,
only broken by the sight of Serena years ago. But to protect
his existence, he must erase Serena’s memory of him
when she is at her most vulnerable: at the height of sexual
pleasure…