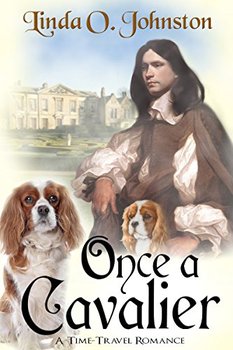 Once a Cavalier
by Linda O. Johnston

Dr. Larryn Maeller, visiting
London, is drawn to a classic portrait of the handsome
historical figure the Duke of Seldrake, along with his small
spaniel, which hangs in his ancestral home where she is
staying. Larryn only recently lost her beloved Cavalier King
Charles Spaniel, a distant descendant of the kind of dog in
the painting, and is attracted to both the dog… and
the man.

When Larryn hears a dog bark on the roof, she
has to investigate—and is drawn back in time to the
Seventeenth Century, the time of London’s Great Plague
and Great Fire, as well as the time of Thomas Northby, the
Duke of Seldrake, and his adorable dog. Can she stay? Does
she want to? Maybe, since she is immediately drawn to the
handsome, sexy and mysterious duke even more than she was to
his portrait.

Readers of favorite new and classic
time travel romances such as those of Diana Gabaldon, Sarah
Woodbury, Karen Marie Moning and Gwyn Cready, as well as
lovers of romances including dogs such as Teri
Wilson’s Unleashing Mr. Darcy, will love Once a
Cavalier!