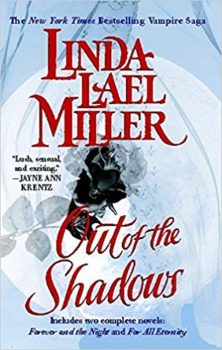 Out of the Shadows

Out of the Shadows
by Linda Lael Miller

Here, for the first time in one volume, are two complete novels in Linda Lael Miller's acclaimed New York Times bestselling world of vampires and mortals, lovers and legends.

Forever and the Night introduces readers to Aidan Tremayne, a vampire damned to a bloodthirsty immortality against his will...and Neely Wallace, a mortal woman who arouses a forbidden temptation that could destroy them both.

For All Eternity is the passionate story of Aidan's twin sister, Maeve Tremayne, a beautiful vampire who haunts the battlefields of Gettysburg like an angel of death...and who dares to lose her soul to a mortal soldier.