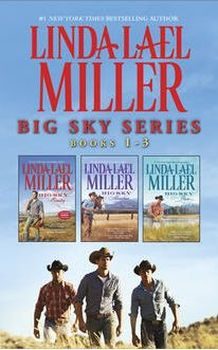 #1 New York Times bestselling author Linda Lael Miller takes you to the town of Parable, Montana, where restless hearts get a second chance at love…

Big Sky Country “Parable, Montana #1” (originally published June 2012 and reissued May 2015)
The illegitimate son of a wealthy rancher, Sheriff Slade Barlow grew up in a trailer hitched to the Curly-Burly hair salon his mother runs. He was never acknowledged by his father…until now. Suddenly, Slade has inherited half of Whisper Creek Ranch, one of the most prosperous in Parable, Montana. That doesn’t sit well with his half brother, Hutch, who grew up with all the rights of a Carmody — including the affections of Joslyn Kirk, homecoming queen, rodeo queen, beauty queen, whom Slade has never forgotten.

But Joslyn is barely holding her head up these days as she works to pay back everyone her crooked stepfather cheated. With a town to protect, plus a rebellious teenage stepdaughter, Slade has his hands full. But someone has to convince Joslyn that she’s responsible only for her own actions — such as her effect on this lawman’s guarded heart.

Big Sky Mountain “Parable, Montana #2” (originally published August 2012)
With his rugged good looks, vast wealth and family name, hell-raiser Hutch Carmody is still the golden boy of Parable, Montana. But he’s done some growing up — making peace with his illegitimate half brother and inheriting half of Whisper Creek Ranch, which should have been all his. These days, Hutch knows there are some things money can’t buy: like the heart of loving, ladylike divorce Kendra Shepherd.

Kendra’s quiet mansion reminds her of what she wants most — a devoted husband and the pitter-patter of little feet. She can’t get Hutch Carmody out of her mind. But a rough-and-tumble cowboy like Hutch, coming home for family dinner? Seems crazy! Then again, crazier dreams have become reality under the vast Montana sky.

Sheriff Boone Taylor has his job, friends, a run-down but decent ranch, two faithful dogs and a good horse. He doesn’t want romance—the widowed Montanan has loved and lost enough for a lifetime. But when a city woman buys the spread next door, Boone’s peace and quiet are in serious jeopardy.

With a marriage and a career painfully behind her, Tara Kendall is determined to start over in Parable. Reinventing herself and living a girlhood dream is worth the hard work. Sure, she might need help from her handsome, wary neighbor. But life along Big Sky River is full of surprises…like falling for a cowboy-lawman who just might start to believe in second chances.