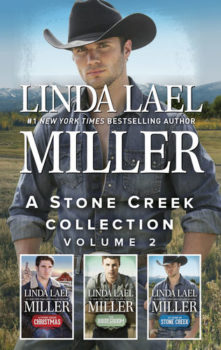 In a small town filled with danger and secrets, only true love will survive. Don’t miss a single fan-favorite story in this box set from #1 New York Times bestselling author Linda Lael Miller...

Stone Creek veterinarian Olivia O’Ballivan communicates easily with animals, but men are another story. Especially globe-trotting architect-turned-rancher Tanner Quinn. Olivia meets him when she cares for his daughter’s pony, and it’s not long before she finds herself conspiring with twelve-year-old Sophie to get Tanner into the Christmas spirit. But will a holiday miracle transform Tanner into a rancher—and family man—for all seasons?

Undercover agent Gideon Yarbro is renowned for stopping outlaws almost before they commit a crime. But now he must stop a wedding—despite the bride’s resistance. Lydia Fairmont will lose everything if she doesn’t honor her betrothal to a heartless banker, but Gideon exploits a loophole and marries her himself after carrying a reluctant Lydia off to Stone Creek. Despite a vengeful ex-fiancé on their trail and a hired gun on the loose, there just might be hope for the marriage… if they can trust each other before it’s too late.

It’s hard for Ashley O’Ballivan not to feel a little lonely. She hasn’t had a booking at her bed-and-breakfast in far too long, or heard from the handsome, mysterious man who broke her heart months ago. But then Jack McCall suddenly reappears—with no explanations and no promises. Jack has secrets, secrets he says he has to keep to protect her. But this time, Ashley’s determined to convince him that he’s at home only in Stone Creek—with her.