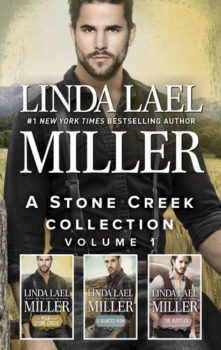 Welcome to Stone Creek, Arizona, where no secrets stay hidden for long and true love is just around the corner… Don’t miss a single fan-favorite story in this box set from #1 New York Times bestselling author Linda Lael Miller!

Badge and gun hidden, Ranger Sam O’Ballivan heads to Arizona to pose as the new schoolteacher to capture rustlers and train robbers… but first must survive his unruly students. For that, he needs the help of Maddie Chancelor, the local postmistress and older sister of one of his most troublesome charges. Working undercover has always kept Sam isolated and his heart firmly in check—but something about the spirited Maddie tempts him to start down a path he swore he’d never travel….

The past has a way of catching up with folks in Stone Creek. But schoolmarm Lark Morgan and Marshal Rowdy Rhodes are determined to hide their secrets—and deny their instant attraction. That should be easy, since each suspects the other of living a lie. As past and current troubles collide when a gang of train robbers threatens the town, Rowdy and Lark must surrender their pride to the greatest power of all—undying love.

Where does an outlaw go when he’s ready to turn straight? For Wyatt Yarbro, reformed rustler and train robber, Stone Creek is his place of redemption… and lovely Sarah Tamlin is the perfect angel to help him clean up his act. But Sarah keeps a dark secret behind her prim and proper facade, even as her heart is lost to charming, sexy Wyatt. When a vengeful enemy prepares to unleash havoc on their peaceful town, Wyatt and Sarah will need to trust each other to win the fight.