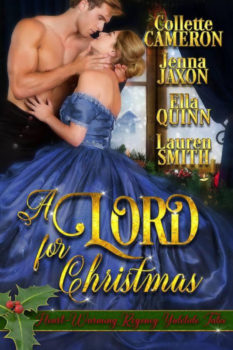 A Lord for Christmas

A Lord for Christmas
by Lauren Smith

Lord Vaughn, Viscount Darlington, has a dark reputation for sinful pleasures, putting off even the most ardent mamas who crave his title for their unmarried daughters They say he’s dangerous enough to ruin a woman with just one look…But he can’t resist the pleas of a woman who needs his help. This rogue might yet be redeemed.

All of London adores Perdita Darby. She receives invites to every party and has eligible gentlemen willing to wait for her, but she has no desire to marry. When she discovers a cruel man wishes to entrap her into a marriage that could spell her doom, she has nowhere left to turn. She makes a bargain with the devil of London, hoping to save herself. But the cost of their false engagement may put them both in danger…

Also includes:
A December with a Duke By Collette Cameron
A Match Made at Christmas By Jenna Jaxon
Twelfth Night By Ella Quinn

You won’t want to miss this heart-warming collection of rogues falling in love over Christmas.