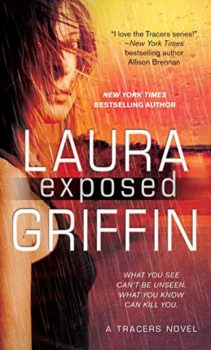 The seventh thrilling novel in the Tracers series from an author who “excels at detailing the mystery and the chase” (Publishers Weekly) features a forensic photographer and an FBI agent who form an uneasy partnership to find a vicious criminal.

With the click of her camera, Maddie Callahan inadvertently added herself to the hit list of a criminal mastermind the FBI’s been investigating for months. Agent Brian Beckmann is determined to protect the sexy photographer, but she may be his only lead.

As a forensic photographer, Maddie is used to seeing violence up close, but she’s never before been a target. When a freelance photo shoot goes awry, she realizes she may have seen, and perhaps photographed, the kidnapping of a key witness in a federal probe. And although her camera was stolen, Maddie has something that could be even more valuable to investigators. With the help of her colleagues at the Tracers crime lab, Maddie uncovers DNA evidence that provides a desperately needed break in the case.

Although Brian is reluctant to involve Maddie, she’s determined to help with the investigation and the two set out to track a vicious criminal known as The Doctor, whose far-reaching violence has led to multiple deaths. But as the task force gets closer to catching the deadly Doctor, Maddie is in more danger than ever...

At the Edge
Alpha Crew Book 1