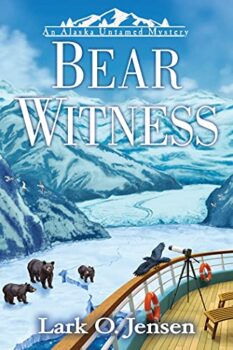 No nine-to-five cubicle career will suit Stacie Calder—the naturalist much prefers working in the great outdoors. Specifically, the spacious and spectacular Alaskan wilderness, whose rugged charms she shares with sightseers on the top deck of the tour boat where she works. But one May afternoon, Stacie’s passengers see more than glittering glaciers, frolicking harbor seals, climbing bears and soaring seabirds…they also witness a man lying dead in the frigid Alaskan waters. And it seems likely that someone gave him a fatal push.

Stacie didn’t know the unfortunate victim, but he sure wanted to know a lot about her. He spent most of his final afternoon bombarding her with questions quite awkward to answer. And when he wasn’t in her hair, he was arguing incessantly with the boat’s beleaguered crew. Which makes for a suspect list about as long as the passenger manifest. Furthermore, as police helicopters relentlessly circle her boat in search of any clues, Stacie is shaken to find herself on that suspect list.

Before the tour boat reaches shore Stacie—accompanied by her beautiful blue-eyed husky, Sasha—must deduce just who sent the testy tourist tumbling into the turgid waters and have the authorities take custody. Because if she can’t, then the killer might aim a fatal ice-cold stare at Stacie.

Linda O. Johnston (aka Lark O. Jensen), a former lawyer who is now a full-time writer, currently writes for Harlequin Romantic Suspense. Her stories include the upcoming Shelter of Secrets miniseries and the K-9 Ranch Rescue miniseries, as well as stories for the HRS ongoing Colton series. She also writes mysteries, which have included the Barkery & Biscuits Mystery Series and Superstition Mysteries for Midnight Ink, and the Pet Rescue Mystery Series and Kendra Ballantyne, Pet-Sitter Mysteries for Berkley Prime Crime—with more to come. And nearly all her current stories involve dogs.