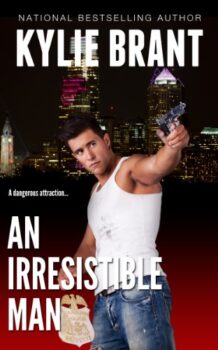 An Irresistible Man
by Kylie Brant

A cloud of suspicion...

From all appearances Cruz Martinez is one of the good guys. A decorated Philadelphia detective with an impressive atta-boy file, he's on the fast track for promotion. And with that rock hard body and killer smile, he's a difficult man to say no to. But Madeline Casey is prepared to do just that.

Someone is arming the youth gangs in the city, and Madeline is partnered with Cruz on the case. But Internal Affairs thinks Cruz might be involved with the supplier. It's Madeline's job to discover the truth.

She knows better than to trust instincts over evidence. But late night stakeouts have her judgement clouding. Is Cruz really innocent, or will that killer smile prove lethal?