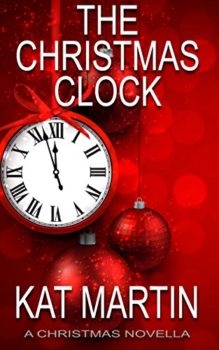 The Christmas Clock
by Kat Martin

Sylvia Winters just found a job and an apartment in her hometown of Dreyerville, Michigan, but she is hesitant to return. Eight years ago, she jilted her fiancé, Joe Dixon, telling him that she was moving to Chicago because small-town living was not for her. But she was lying. Syl was headed to Chicago to be treated for cervical cancer. Sadly, Joe never knew the real reason she left him. Confused and distraught, he turned to drinking to heal the pain, until he accidentally killed a man and served years in jail. Now Syl and Joe are both back in town, but it will take a miracle to bring them back into each other’s arms.

Also in town is Lottie Sparks and her grandson, Teddy. Ever since Lottie’s daughter was killed in a drunk-driving accident, Lottie’s been in charge of Teddy. He appreciates her love more than she knows, so much so that the industrious eight-year-old hits up Joe’s auto body shop, so he can save enough money by Christmas to buy his grandmother a Victorian clock she adores—one that vividly reminds her of her childhood, even as the rest of her memories are slipping away with the onset of advanced Alzheimer’s.

As spring turns to summer and summer to fall, matters in the Sparks’ household take a turn for the worse. And with winter approaching, will a little hope and a big dose of Christmas magic be enough to make everything all right again?