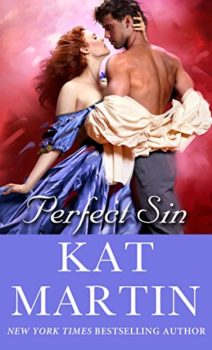 He was the ultimate rake.
But Randall Clayton, 7th Duke of Beldon, harbors a hidden motive for seducing the fiery haired, passionate Caitlin Harmon. Rand is on a mission to find a murderer...and it's leading straight to Caitlin's father.

She was the ultimate temptation.
Cait Harmon, the feisty, intellectual daughter of an American adventurer, is certain she will never fall in love. But one dance with the powerful, compelling Duke of Beldon and Cait's heart is lost forever.

Theirs was the ultimate love.
They were the talk of London, until passion and betrayal tore them apart. Now, in Perfect Sin by bestselling author Kat Martin, Rand must embark on the quest of a lifetime: proving to Caitlin that love is the most powerful treasure of all.