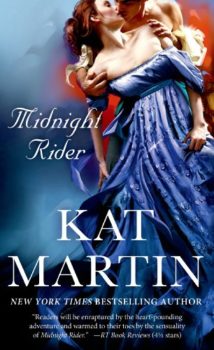 She was his captive.

As soon as the tall, handsome Spaniard leaned down from his stallion to offer her a rose, Caralee McConnell knew California held danger. But all too quickly she was forced to deny the heat Ramon de la Guerra had sparked. Determined to please her uncle who had saved her from poverty, she must resign herself to marrying a man he has chosen for her...and ignore what is in her heart.

He was the one man she was forbidden to have...

Behind Ramon's dark eyes throbbed the memory of his lands, stolen by the beautiful Americana's uncle. He had sworn to reclaim them---riding by night as the ruthless outlaw, El Dragón. In a moment of rage and revenge, he stole Caralee away to his mountain lair...but there, in a passion as sweet as California wine, he would reveal a secret that could cost him his life---and his heart's freedom---in Midnight Rider.