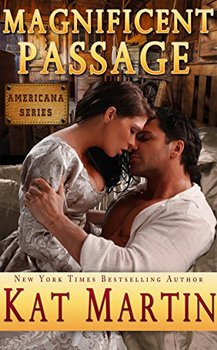 Mandy Ashton fled a stifling frontier existence for the
glittering social whirl of Sacramento City,
California’s state capitol. Masquerading as her
rebellious cousin, Julia, she journeys with rugged
frontiersman, Travis Langley, a white man raised by the
Cheyenne, a man called Hawk who is trying to make peace with
his dual heritage. The last thing Hawk needs is a job
chaperoning the governor’s spoiled daughter. But the
girl is spirited, captivating, and irresistibly sensuous. By
journey’s end, Mandy and Hawk have become helpless
prisoners of a passion that nothing can kill—except,
perhaps, the secret of her identity that Mandy has kept
through the arduous days and passionate nights of their
long, magnificent passage.

Twenty five years ago I started my first novel,
Magnificent Passage. In those days, the hero was
all-man and the heroine was pretty much at his mercy. Though
male, female roles have changed since Magnificent
Passage was published in 1988, I hope you have fun
reading Hawk and Mandy’s story. Having come from a
family that included a grandmother who was a rodeo cowgirl
in 1916, a father who was a PRCA team roper, and an uncle
who was a famous rodeo bullfighter, choosing a Western
setting for my first novel was a perfect fit.

I hope you enjoy the oldie-but-goodie that began my writing
career, and that you’ll look for other of the more
than sixty Historical and Romantic Suspense novels I have
written over the years.

Till next time, wish you all the best and happy reading,