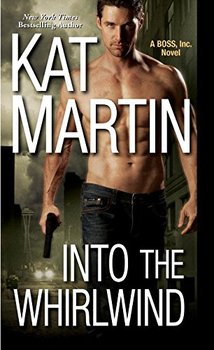 Into the Whirlwind
by Kat Martin

A bodyguard, a bounty hunter, a private investigator, no
one can handle the heat like the men of BOSS, Inc.

Megan O’Brien is at her wit’s end. Her
three-year-old son has been kidnapped. No police, says the
ransom demand. Fearing for her son’s life, Meg has no
choice but to turn to her former bodyguard, Dirk Reynolds.

Dirk’s never forgiven Meg for the way she left him
after their brief affair. But with bounty hunter Luke Brodie
on his side, Dirk knows he’s got to help Meg rescue
her son.

The few clues they’ve gathered send them spiraling
into a murky world of high-stakes gambling and international
crime. Meg may be way out of her depths, but she’s
seeing a side of Dirk she never suspected—one no woman
could possibly resist.