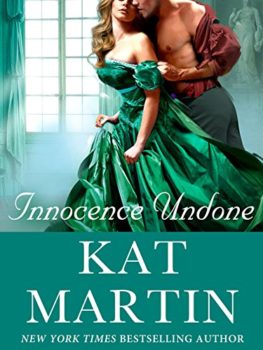 An irresistible lady with a turbulent past.

In Innocence Undone, Jessica Fox wasn't always the beautiful, composed young woman who is the toast of the London ton. Born in poverty, Jessica wandered the streets until fate found her a guardian in the aging Marquess of Belmore. Now, it is fate she tempts with her longing for the Marquess's son, the arrogant and handsome Captain Mathew Seaton.

A passionate lord with a dangerous future...

Upon his return from the sea, Matthew is forced to confront the sensuous beauty he believes has set her sights on the Belmore title. Though his mind tells him to beware, his blood boils with thoughts of luring her into his bed. To win his love, Jessica will do anything. But when desire flames and the dark shadow of her childhood lengthens, she risks everything she has dreamed of in a dangerous battle of wills...