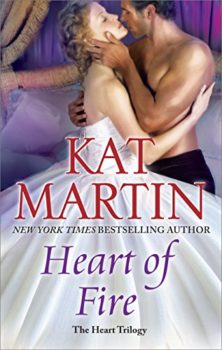 Heart of Fire
by Kat Martin

As a viscount's daughter, vivacious Coralee Whitmore is perfectly placed to write about London's elite in the outspoken ladies' gazette, Heart to Heart. But beneath her fashionable exterior beats the heart of a serious journalist.

So when her sister's death is dismissed as suicide, Corrie vows to uncover the truth, suspecting the notorious Earl of Tremaine was Laurel's lover and the father of her illegitimate child. Corrie infiltrates Castle Tremaine posing as a wide-eyed country relation whose charming figure---and reduced circumstances---make her irresistible to the confirmed scoundrel. But Corrie finds the earl is not all he seems...nor is she immune to his charms, however much she despises his caddish ways.

Far from a society column, Corrie's life soon reads more like one of Mr. Dickens's serials. But the danger of her ruse is hardly fictional: someone is bent on ensuring Corrie's questions go unanswered---and unasked.