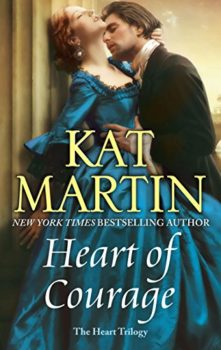 Heart of Courage
by Kat Martin

Under the pert pen name "Lady Smart," opinionated Lindsey Graham crusades for social change among London's elite, writing for the ladies' gazette Heart to Heart. But Lindsey's greatest campaign begins when her brother Rudy, a notorious rake, is accused of murdering a string of prostitutes.

Her confidence in his innocence is bolstered when an anonymous letter arrives naming Viscount Merrick as the killer. Lindsey launches her own investigation into the gentleman's questionable pursuits, a risky venture that earns her an unwelcome bodyguard---Thor Draugr.

At first, Lindsey refuses the protection of her employer's brother-in-law. They are like oil and water, yet she can barely conceal her attraction to the rugged Norseman. But an attempt on her life reveals not only the lengths that someone will go to in order to prevent her interference in the viscount's sordid affairs, but that she can no longer deny that she desires the warrior by her side....