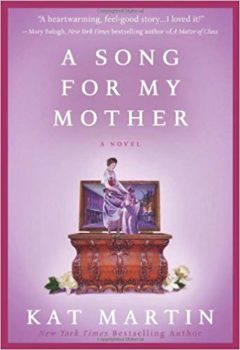 A Song for My Mother

A Song for My Mother
by Kat Martin

Years after running away with her boyfriend in her junior year of high school, Marly Hanson returns to Dreyerville at the request of her daughter, Katie, who has recently been treated for brain cancer. Katie has never met her grandmother, Marly's mother, Winnie. But Marly and Winnie have been estranged for years and confronting the past for each of them is painful. The homecoming is bittersweet, but revisiting the conflict between them is crucial if Marly and her mother are ever to find the bond they shared before Marly left Dreyerville.

To complicate matters, living next door to Winnie is handsome sheriff and widower Reed Bennett, and his son, Ham, who is close to Katie's age. Ham and Katie become fast friends, while their parents find their attraction to one another going deeper than mere friendship. But Marly's time in Dreyerville is limited and risking her heart isn't something she's willing to do.

As the days slip past, and though she tries to avoid it, Marly and Reed become more deeply involved. Can she risk loving the handsome sheriff and give up the the future she worked so hard to forge for herself and her daughter? Can she make a life in Dreyerville after what happened all those years ago?

Will Marly finally realize that her true destiny and ultimate happiness lie in coming to terms with her past?