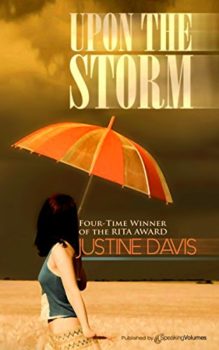 Upon the Storm
by Justine Davis

SHELTER FROM THE STORM

Trace Dalton had spent three long years searching for the mysterious woman who had changed his life forever. But when the famous film star finally found Christy Reno, nothing could convince her that he wanted her for keeps, nothing could prove to her that she need never again face life’s storms alone.

Christy had thought of Trace every day for the past three years, and she thought of him now every time she looked into her daughter’s eyes—eyes that were so like the child’s famous father’s. But Christy could never be part of this man’s world. And she was determined to hold fast to what she had—even if it meant losing the only man she had ever loved.

Originally published May 1992 in mass market paperback in Silhouette Desire #712.