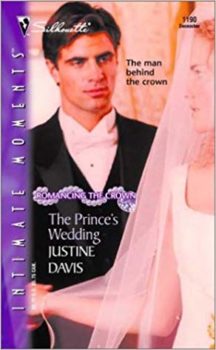 The Prince's Wedding
by Justine Davis

Jessica Chambers stared into the deep blue eyes of her baby's father and saw a stranger. The ranch hand with amnesia whom she'd called "Joe" was gone forever. For Prince Lucas Sebastiani had regained his memory and his life--and now he had come to claim the mother of his child as his future queen. But although her body burned for his sensual touch, Jessica knew she must resist. Her regal suitor spoke of privilege and duty but said nothing of the feelings in his heart for his commoner bride. And though Lucas had laid his kingdom at Jessie's feet, all she wanted was his love....