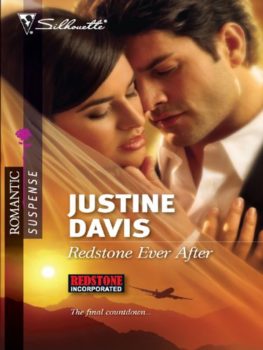 Redstone Ever After
by Justine Davis

Redstone, Inc., pilot Tess Machado is awaiting her boss when two armed men muscle their way onto her plane in the middle of the California wilderness. It’s Josh Redstone—of the Redstone empire—they want. But Tess isn’t giving up the man she secretly loves—not without a fight.

Josh always knew this day would come. Being the head of Redstone put a giant target on his back. The kidnappers on board the Hawk V are armed and dangerous, but they’re forgetting one glaring detail. No one—no one—puts his Tess in harm’s way and gets away with it.

Will Tess and Josh admit what’s been so obvious to others...before they’re silenced forever?