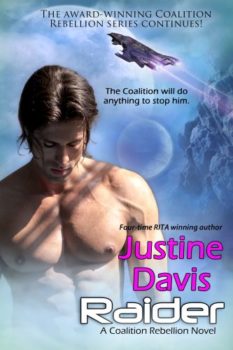 The Coalition will do anything to stop him.

In the mist-shrouded world of Ziem, when the people are ready, a hero will rise . . .

A mysterious, battle-scarred warrior known only as the Raider wages war against the Coalition conquerors.

Drake Davorin, a tavern keeper and “first son” of Ziem, has turned away from the resistance to protect his orphaned siblings.

Kye Kalon is a woman caught between them both in her fight to save Ziem.

One man fights for their world. The other for family. One is the commander of the rag-tag group of fighters known as the Sentinels, and the other is the man she loved before the Coalition violently conquered their world.

But Drake Davorin keeps a deadly secret. One wrong decision could destroy all of Ziem . . . unless the Coalition destroys them first.

Author of more than sixty books (she sold her first ten in less than two years), Justine Dare Davis is a four-time winner of the coveted RWA RITA Award, and has been inducted into the RWA Hall of Fame. Her books have appeared on national bestseller lists, including USA Today. She has been featured on CNN and taught at several national and international conferences and at the UCLA writer’s program.