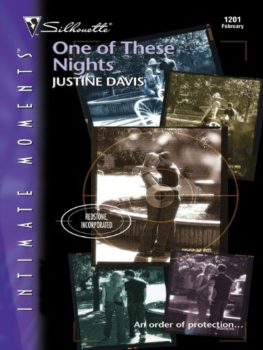 One of These Nights

One of These Nights
by Justine Davis

WAS SHE JUST FOLLOWING ORDERS...

Corporate security guard Samantha Beckett knew that sexy electronics genius Ian Gamble would balk at having her as his bodyguard, so she decided that posing as his neighbor was the best way to keep her eye on him. Professionally speaking, of course...

OR FOLLOWING HER HEART?

Ian thought that suddenly acquiring the most beautiful woman he'd ever seen as his next-door neighbor was too good to be true. An then Samantha turned out to be his hired...bodyguard! Well, perhaps it was time they both took her job description more literally.