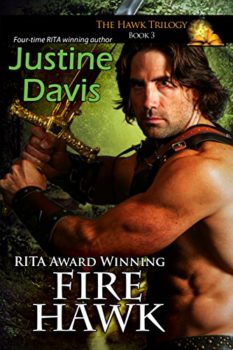 The RITA® Award winning final book in The Hawk Trilogy!

She’ll become the warrior's woman to save her people.

In a time of legends, wizards, mists, and magic, the Hawk clan’s ancient spell of protection surrounding their secluded and peaceful forest is weakening. When a vicious warlord threatens the clan’s existence, their only hope lies in finding a great warrior with the skills to save them. The task falls to Jenna, but convincing a legendary warrior who has buried his sword to save her people will cost her everything.

Kane has a past filled with betrayal and a prophecy that warns him taking up the sword again will mean his death. Despite the danger, he’s unable to completely refuse Jenna’s plea for help. He agrees to train her in the arts of war in return for her innocence. All too late he realizes he’s made a fool’s bargain; he wants much more than her body. She owns his soul, and that may cost him his life.