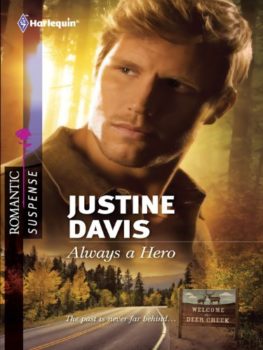 Always a Hero
by Justine Davis

In his old life as a Federal agent, Wyatt Blake lived wild. But now that he’s parenting a teenage son, “square” is a name he wears with pride. Too bad Jordy doesn’t agree. The only one who gets through to the boy is Kai Reynolds. Sure, she seems respectable now, but she used to be quite wild herself. Or so Wyatt’s heard.

Danger finds Jordy, and drags Kai in, too. As Wyatt and Kai investigate the drug dealers targeting his son, they uncover a deadly link to Wyatt’'s own past. Now this unlikely duo needs to find the wild side each had thought long buried—for Jordy, and maybe for each other.