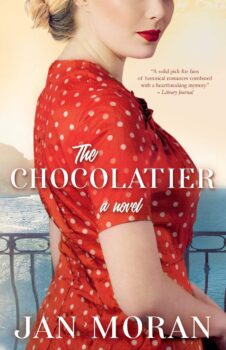 The Chocolatier
by Jan Moran

In The Chocolatier, Jan Moran offers a testament to the resilience of love, along with insights into the fascinating world of chocolate-making.

A young widow. A husband she thought she knew. On the picturesque Italian coast of Amalfi lies a chocolatier's destiny...

San Francisco, 1953: Heartbroken over the mysterious death of her husband, Celina Savoia, a second-generation chocolatière, resolves to take their young son to Italy's shimmering Amalfi coast to meet his father's family. Just as she embarks on a magical, romantic life of making chocolate by the sea surrounded by a loving family, she begins to suspect that her husband had a dark secret--forged in the final days of WWII--that could destroy the relationships she's come to cherish.

While a second chance at love is tempting, the mystery of her husband's true identity thwarts her efforts. Challenged to pursue the truth or lose the life and those she's come to love, Celina and her late husband's brother, Lauro, must trace the past to a remote, Peruvian cocoa region to face the deceit that threatens to shatter their lives.