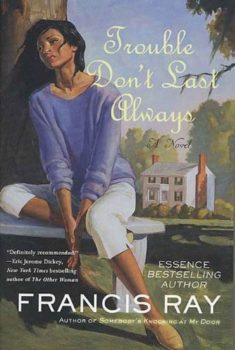 Desperate to escape her abusive marriage, Lilly Crawford files for divorce, then slips away from her small east Texas hometown with little more than the clothes on her back. She points her twelve-year-old car east, hoping to find a new beginning. When her car breaks down in Louisiana, Lilly finds unexpected employment as the caregiver for a wealthy neurosurgeon named Adam Wakefield, who lost his sight in a recent carjacking. At first, this handsome, brooding man reminds her too much of the angry husband she left behind and she reminds him of how far he has fallen from the self-assured man he once was. But as the two spend long days together, an unexpected bond develops—one that will be deeply tested. For Lilly must confront her violent husband before she can ever hope to move on and truly discover a second chance at life and love.

Originally published April 2001 under the title THE TURNING POINT and then January 2004 in trade paperback under TROUBLE DON’T LAST ALWAYS.

Other Books by Francis Ray

Going to the Chapel

All That I Desire
A Grayson Friends Novel Book 10

Somebody's Knocking at My Door
Against the Odds #1

All That I Need
A Grayson Friends Novel #9

All of My Love
A Grayson Friends Story

All I Ever Wanted
A Grayson Friends Novel #8

Sing to My Heart

With Just One Kiss
A Grayson Friends Novel #6

Mrs. Ray, also established The Turning Point Legal Fund to assist women and children of domestic violence to help restructure their lives. The fund is administered by The Family Place, a woman’s shelter in Dallas, Texas.