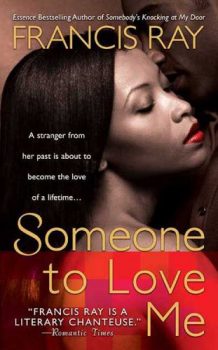 Someone to Love Me

Someone to Love Me
by Francis Ray

Nine years ago, Michelle Grant was at rock bottom—until a chance meeting with a stranger gave her hope…and her first delicious taste of passion. Now a successful businesswoman, Michelle still remembers the man she knew only as B.J.. And when fate brings them together again, the feelings she had for him come rushing back. But as soon as Brad Jamison speaks, Michelle realizes that the caring man she once knew is now a hardened businessman without warmth or tenderness, and he doesn’t remember her…

Brad has heard the rumors that Michelle’s success may be due more to her looks than her brain—but he doesn’t believe them. He knows how hard it can be for a black woman to get ahead in business. Indeed, when Brad finally meets Michelle, her head for business impressed him—while her almond skin and smooth curves send his mind reeling. She seems so sweet…even familiar. But if he discovers the shared past that only she remembers, will it tear them apart forever?

Other Books by Francis Ray

Going to the Chapel

All That I Desire
A Grayson Friends Novel Book 10

Somebody's Knocking at My Door
Against the Odds #1

All That I Need
A Grayson Friends Novel #9

All of My Love
A Grayson Friends Story

All I Ever Wanted
A Grayson Friends Novel #8

Sing to My Heart

With Just One Kiss
A Grayson Friends Novel #6

Mrs. Ray, also established The Turning Point Legal Fund to assist women and children of domestic violence to help restructure their lives. The fund is administered by The Family Place, a woman’s shelter in Dallas, Texas.