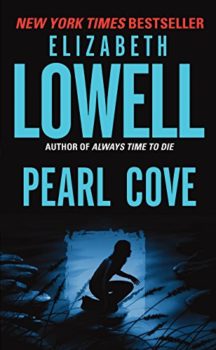 Surrounded by potential enemies, Hannah McGarry faces the mystery of her husband's suspicious death, the prospect of bankruptcy...and the disappearance of the fabulous Black Trinity necklace that was to be her financial security. Desperate, she calls Archer Donovan, a silent partner in Pearl Cove, her late husband's pearl farm venture. He might help her...if the price is right.

Archer Donovan would rather forget he'd ever heard of Pearl Cove...its memories of living on the dark side, the soul-numbing certainty that there was no law, no justice, no mercy; just hunters and the hunted. That life taught him to trust no one but family. But when Hannah McGarry calls in an old debt, Archer is back in the game. And at his side in pursuit of the stolen fortune is a woman he shouldn't want, yet cannot resist...a woman who may know more than she's telling about her husband's death...and more than is safe to know about the dark and elusive black pearls. With deadly competitors on their tails, Archer and Hannah race through uncharted waters in search of the fabulous Black Trinity. And the closer they come to finding the coveted pearls, the closer they come to danger and death...and to each other.