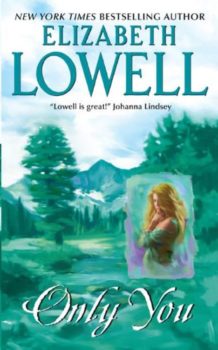 Only You
by Elizabeth Lowell

Made desperate by poverty and loss, Evelyn Starr Johnson sees a golden opportunity to win back her lost status by recovering the treasure map stolen from her murdered foster parents. And with nothing left to wager but her innocence, the beautiful card shark stares coolly at their killers across the poker table - then stacks the deck and deals the winning hand to a handsome, unsuspecting stranger.

When the exquisite temptress he won at a card game runs off with rest of his winnings, sharpshooter Matt Reno Moran vows to hunt her down-never dreaming it is his destiny to join forces with the thieving female on a dangerous search for hidden gold. But, come hell or high water, Reno is determined to reclaim everything that is rightfully his - including the tempestuous woman who calls herself Evening Star, who Reno dares not love, but desires with all his soul.