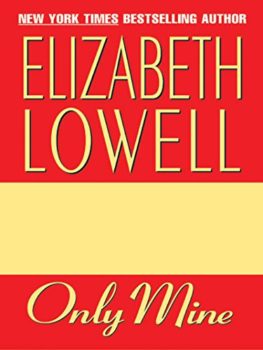 Only Mine
by Elizabeth Lowell

The bastard son of a viscount and a Cheyenne shaman's daughter, Wolfe Lonetree agrees to rescue the pampered Lady Jessica from an unwanted impending wedding---but only if she will be his wife.

Naïve and shockingly innocent, Lady Jessica Charteris tricked a rugged, handsome stranger into a marriage in name only in order to escape a union with a vile British lord. Totally unprepared for the hardships awaiting her in America, she is terrified by the prospect of life in the harsh and magnificent land at the edge of the Rockies. But even more frightening is Wolfe himself---a man whose raw sensuality leaves her breathless. Her proud, virile new "husband" is not one to be trifled with, nor will he be denied what his heart fervently desires---for only in Wolfe Lonetree's arms can Jessica truly learn the unparalleled joy of becoming the right man's woman.

Originally published February 1992 and reissued May 2003 in mass market paperback.