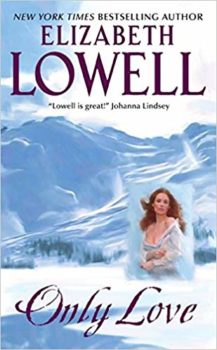 Only Love
by Elizabeth Lowell

Cast adrift during the War Between the States, Shannon Conner grew to womanhood in a lonely cabin high in the Colorado Rockies. Though stubborn and courageous, Shannon is ill-prepared to deal with the predatory Culpepper brothers---and the intoxicating ardor of the man who defends her honor, Rafael "Whip" Moran.

A loner and a wanderer, a man tied to no place or promise, Whip aids the wary young "widow" who has a walk like honey and a determined grip on her shotgun. But neither the Culpeppers nor grizzlies are as dangerous to Whip as the passion Shannon offers him---passion that could cost Whip the freedom that is as much a part of him as his soul.
(Originally published 07/95)