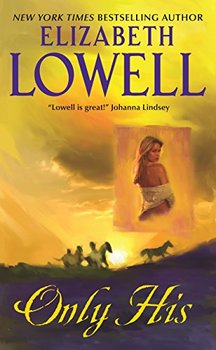 Only His
by Elizabeth Lowell

Escaping the ravages of the Civil War, a gently reared
lady must leave behind everything she knows --- and
trust her life and her future to a dangerous gunfighter with
a passion for vengeance.

A team of prize Arabian horses is all that Willow Moran has
left --- and Caleb Black is the only man who can help
her reach her brother in the Colorado Rockies. But she fears
this stranger who burns to avenge the wrongs of treacherous
men. For Caleb is as wild and unpredictable as the
uncivilized land he loves. Yet, though she challenges him at
every turn, the spirited southern lady knows this proud,
enigmatic loner is her destiny. And no matter what peril
awaits, they must face it together --- for Willow has
become a fever in Caleb's blood ... awakening a need so
fierce that he would defeat the devil himself to possess her.