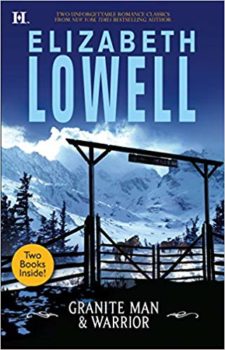 Granite Man (originally published in Silhouette Desire #625, 03/91)
Mariah MacKenzie returned to her family's Rocky Mountain ranch determined to reclaim a life she's longed for. Cash McQueen was a distraction she didn't need, a temptation she didn't want---but the only man tough enough to be her guide on a bold quest for a legendary treasure. Cash's passion for prospecting didn't run to beautiful women...anymore. Until Mariah made him want to believe again in something more precious than gold...

Warrior (originally published in Silhouette Desire #631, 04/91)
When wildlife biologist Eden Summers arrives in the Colorado Rockies, she has only one thing on her mind: to continue her research on the local cougar population. A capable woman, used to living and working alone in the wild, she is self-possessed and confident, able to handle any threat from nature's fiercest predators---until she gazes into the eyes of Nevada Blackthorn.

She pulled him, injured and bleeding, to safety in the middle of a storm, unleashing a man who would invade her deepest dreams. But Nevada---a rancher by trade, a warrior by nature---is a man who has learned that walking away from caring is the only key to survival and that only the strongest survive. Any woman fool enough to try and change him will be hurt---badly---for their efforts.

Perhaps Eden is that kind of fool. Or perhaps she has no choice but to follow a calling as fierce, as wild and as natural as the beating of her own heart . . .