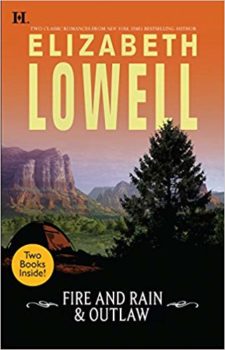 Fire and Rain (originally published in Silhouette Desire #546, 01/90)
Owner of the wildest, loneliest ranch this side of the Rockies, Luck MacKenzie hadn't laid eyes on Carla McQueen for three years. Not since they day he'd sent his best friend's kid sister storming from the Rocking M Ranch and out of his life---for what he thought was forever . . .

Now Carla was back, lovelier and even more desirable than in his burning memories. But Luke knew he could never give in to the raging need to make her his woman. For he'd made a vow long ago---one that he was determined to keep---that he would never fall in love with Carla McQueen. No matter how badly his body and soul ached for her . . .

Outlaw (originally published in Silhouette Desire #624, 02/91)
Archaeologist Diana Saxton has come to Colorado's mesa country to explore the Anasazi cliffs. She doesn't need the help of Tennessee Blackthorn, a man as tough and commanding as the land itself. But the sexy ranch hand seems determined to unlock the secrets of the mesa---and the passion in Diana's heart.