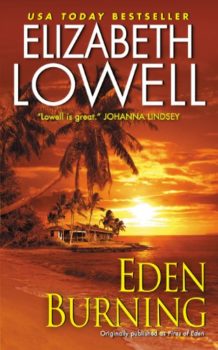 Paradise calls to Chase Wilcox. A man of science fascinated by the rebirth of life in the wake of cataclysmic natural upheaval, he is drawn to the lush beauty of the island of Hawaii and the secrets it holds---while escaping the destruction of his own personal world. Here where warm breezes caress the skin and vibrant colors assault the senses---and where dangerous fires rate unseen beneath the earth's surface---Chase plans to immerse himself in his work. . .and somehow heal and forget. The last thing he needs or wants is love.

But the island is home to many unexpected wonders, which is why Nicole Ballard could never leave it. A research assistant, an artist, and a dancer---a tall, stunning redhead who goes by the stage name of Pele, the goddess of fire---she, too, hides a secret pain, releasing her pent-up sensuality to the accompaniment of native drums before a mesmerized audience. Nicole has never met a man quite like Chase, strong, intense, and brilliant. And he, in turn, is fascinated by this remarkable woman who seems to be a breathtaking force of nature in her own right. Fate has cast them together, causing a chain reaction that neither imagined in their most secret dreams.

Joined on an important scientific project that carries them into the verdant heart of a tropical wonderland, Nicole and Chase will be forced to confront their own lingering inner darkness, while resisting a newly inflamed need to touch, to give...to care. But in the shadows of Kilauea, all restraints will be broken, as emotions flow as hot and free as rivers of molten lava. And desire will erupt, as unpredictable and dangerous as the living volcano, transforming the very landscape of their lives---a torrent that no power on earth can contain, a passion that burns like fire.