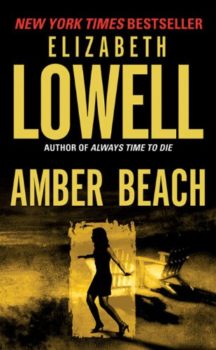 Honor Donovan is a shrewd businesswoman, yet she has been shut out of Donovan International by her father and four brothers. When her favorite brother Kyle vanishes, along with a fortune in stolen amber, Honor's questions are ignored by the Donovan males. Defying them, she heads to the San Juan Islands of the Pacific Northwest in search of answers.

Honor needs a guide because she knows nothing about running a boat—and she knows nothing about Jake Mallory until he answers her ad. One of the things she doesn't know is that Jake is much more than a fishing guide. Until Kyle disappeared, Jake was brokering amber deals in the Baltic for Donovan International. Honor is completely unaware of the old wars, new politics, greed, and stolen amber that have lured ruthless, high-stakes players from around the globe.

Jake wants no part of the intrigue, or of a Donovan woman in his life, but he suspects the Donovans have set him up to take the fall for Kyle's treachery. The way Jake sees it, some Donovan is going to pay for his troubles, and it just may turn out to be Honor

Jake and Honor cast off on a journeys moldering with distrust, betrayal, vengeance... and temptation. A hunger grows between them that is as dangerous as the secrets they keep. Alone at sea, they pursue the stubborn mystery of the Amber Room, flee from relentless enemies, and fight against trusting each other. Yet when Honor and Jake dare to confide in one another, they face a final truth: the penalty for betrayal is death; the reward is a lifetime...together.

Originally published October 1997 in hardcover by William Morrow and May 2001 in mass market paperback by Avon.